Funny how God works sometimes. I was able to go to The 2012 Justice Conference Feb.24th,25th, and after the final main session when Francis Chan spoke, I texted Ricky how similar their thoughts are. Many things Francis said from the stage, I’ve heard escape Ricky’s lips as well. Well, when he heard that, he surveyed our tiny bookshelf for the one Francis Chan book we own, Crazy Love.

He’d read through just the first part of it once before, but was in a completely different spot, emotionally. It was in Austin, just after he quit SCBN. It never engaged him. A few years has passed since then, and his heart is in a whole different place now. So much opportunity has come his way. He’s been given a wonderful job at Fidelity National Title, and even better, lately he has been given new perspective. One much more eternal. And Francis Chan’s book, Crazy Love, has been a huge part of that new perspective.

So if I’d not been able to attend that conference, he would’ve not been inspired to re-read that book, his perspective would’ve been fresh and right, but not really what God had in mind for him right now. Now it is extreme and self-less and generous and compassionate, and more understanding of God’s glory and love for us.

I’m asking God to prepare my heart, as I dive into the same book…for any lifestyle changes ahead. I’m asking God to set the stage of my heart so that I am willing to fully support my husband, not be so self-seeking or clingy to the material and tangible, but trusting that he wants to make these new changes and decisions for the good of his family, and the glory of his God.

This is a perfect example of extremism that has taken root in our Russ men! If they do it, they do it 100%. If they’re hurt along the way, it’s all downhill for them and everyone in their vicinity. Just watch any time Braylon falls down or gets tripped, and you know just what I mean. It’s all or nothin’ with these guys. Which in one sense, is a great thing. It’s a recipe for a tumultuous roller-coaster life, but makes me thankful. Why? Revelation 3:16 says in essence, because you are lukewarm, neither hot or cold, you make me want to vomit. God is saying this!
I’m thankful that my man is rarely lukewarm, and that he is right now, HOT, on fire for God’s will. Listening, changing, & letting faith lead him.

Braylon, Angel and I are still along for the ride, no matter what…trusting God, and thanking him for this man he’s put in our lives to lead & teach us. 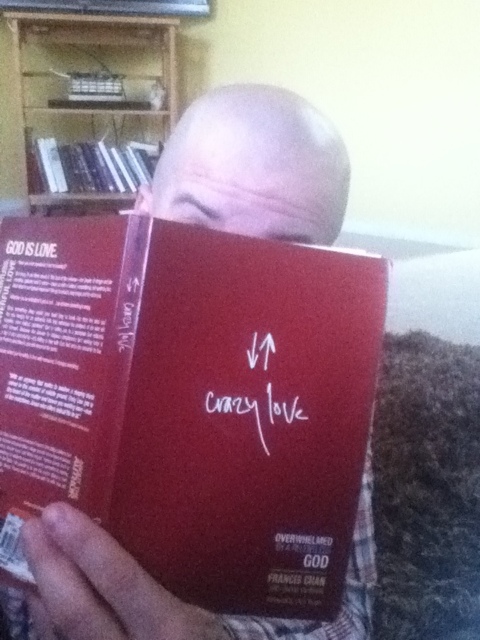